Exposure to Dirty Air Could Harm Hearts of Children 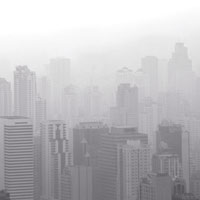 Exposure to toxins in polluted air can have devastating effects on an individual’s health. An Ohio State University study suggests there are also significant health risks for children whose parents were exposed to polluted air before the child’s conception. A parent’s exposure to polluted air prior to conceiving a child could result in serious heart problems for their child. For individuals frequently exposed to highly polluted air, such as military members and residents of large cities, the risk is even greater.

Researchers studied the effects of exposure to polluted air on mating mice. Results published in the Journal of the American Heart Association indicated that exposing mice to dirty air prior to their mating resulted in increased health risks for subsequent generations of mice. Offspring that were exposed to dirty air prior to conception developed heart problems, including impaired heart function, elevated markers of oxidative stress, such as low antioxidant levels, and altered amounts of beneficial calcium regulatory proteins. These heart conditions appeared in young and healthy mice who should not have been displaying increased risks for heart disease.

The study attempted to replicate dangerous contaminated air levels with harmful matter similar to levels routinely seen in large cities, such as Beijing or Los Angeles. Dirty air was created with particulate matter levels in accordance with the United States Environmental Protection Agency’s daily air quality standards.  The mice were exposed to the dirty air on average for 30 hours per week prior to their mating period.

Male offspring of mice exposed to the dirty air were studied after their birth for any adverse health complications. In addition to taking basic echocardiographs on the mice, the animals’ cells were examined for typical markers of heart disease.  Researchers found overwhelming evidence that the parents’ exposure to pollution prior to conception could result in harm to the offspring.

The scientists plan to continue their research by studying the differences between male and female offspring and determining if the exposure to the parent had a greater effect on the offspring. As the animal research continues, human studies are expected to follow on populations highly exposed to toxic air, such as those in New Delhi, India and Beijing, China.

Entities placing dangerous toxic substances in the air may eventually face responsibility for physical injuries. Individuals injured by exposure to toxic substances often spend significant amounts on medical treatment and rehabilitation. Other individuals suffer lost wages due to their inability to work.  Individuals exposed to toxins may be entitled to compensation for any adverse health effects they suffer, including injuries to their unborn children. Corporations responsible for releasing toxins into the environment may be found responsible for causing these injuries through the filing of civil lawsuits. Consulting with an experienced environmental lawyer is the first step in determining whether compensation is available for toxic exposure injuries.

At Jacobs & Crumplar, P.A., our experienced Delaware environmental lawyers help toxic exposure victims obtain compensation for their injuries. Our offices are conveniently located in Wilmington and Georgetown, Delaware to serve injured individuals throughout Dover, New Castle County, and Sussex County. To schedule a free consultation, call us today at 302-656-5445 or contact us online.