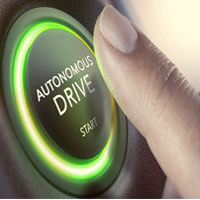 Autonomous cars are becoming more prevalent on American roadways. It is no surprise that as we struggle to adapt to this new technology, accidents will happen. Many argue that the technology is developing faster than the law can keep up. Who is to blame when a self-driving car is involved in an accident? The time-tested framework for assigning liability for negligence and coverage through large insurance companies is being tested.

Because autonomous cars do not act the same way as “regular” cars driven by people, it can be difficult for authorities to investigate who is to blame for the accident. A 2017 accident involving a self-driving car has brought some of these problems to light.

A plaintiff motorcyclist claims that he was driving behind one of GM’s autonomous vehicles, a Chevrolet Bolt, when the car changed lanes and veered to the left. The car had a human “back-up” driver sitting behind the wheel, as required by California state law. When the car changed lanes and the cyclist pulled forward, the Bolt suddenly swerved back into the lane. The cyclist claims he was knocked off of his bike and onto the ground.

The San Francisco Police investigated the motorcycle accident and issued a report. They cited the Plaintiff cyclist for passing a vehicle on the right. The Plaintiff has retained an attorney, who says that GM should be held responsible, because his client was just innocently traveling down the road when he was struck.

GM has acknowledged that the car was in self-driving mode and aborted the lane change. However, the company notes that the motorcyclist was riding between two lanes—known as “lane-splitting.” Although this is not illegal in the state of California, the Defendants claim the man lost his balance when he saw the car heading back into his lane and simply fell.

Many speculate that companies like GM who manufacture autonomous vehicles are likely to quickly settle any cases where it appears that the technology may be at fault. A Stanford researcher and University of South Carolina School of Law professor has opined that if there are cases where the driver of the non-autonomous vehicle may have been to blame, it is expected that automakers will vigorously fight those lawsuits to protect their image.

For numerous reasons, accidents involving self-driving cars may be difficult to investigate. However, an experienced Wilmington car accident lawyer may be able to obtain data, including video and driving information culled from the computer technology of autonomous vehicles to help determine who is responsible.

The proliferation of self-driving cars could easily change the nature of driving across the nation. As such, how accidents will be handled will almost certainly change with it.

If you were struck by a self-driving car, whether you were on foot, on a bike, on a motorcycle, or a driver or passenger in another car, you may be entitled to compensation for your injuries. The experienced Wilmington car accident lawyers at Jacobs & Crumplar, P.A. can help you determine your legal options in this rapidly evolving area of the law and help you pursue your claim. To schedule a free consultation, call us today at 302-656-5445 or contact us online. We proudly represent car accident victims throughout Delaware, including the communities of Wilmington, Dover, and Georgetown, Delaware.