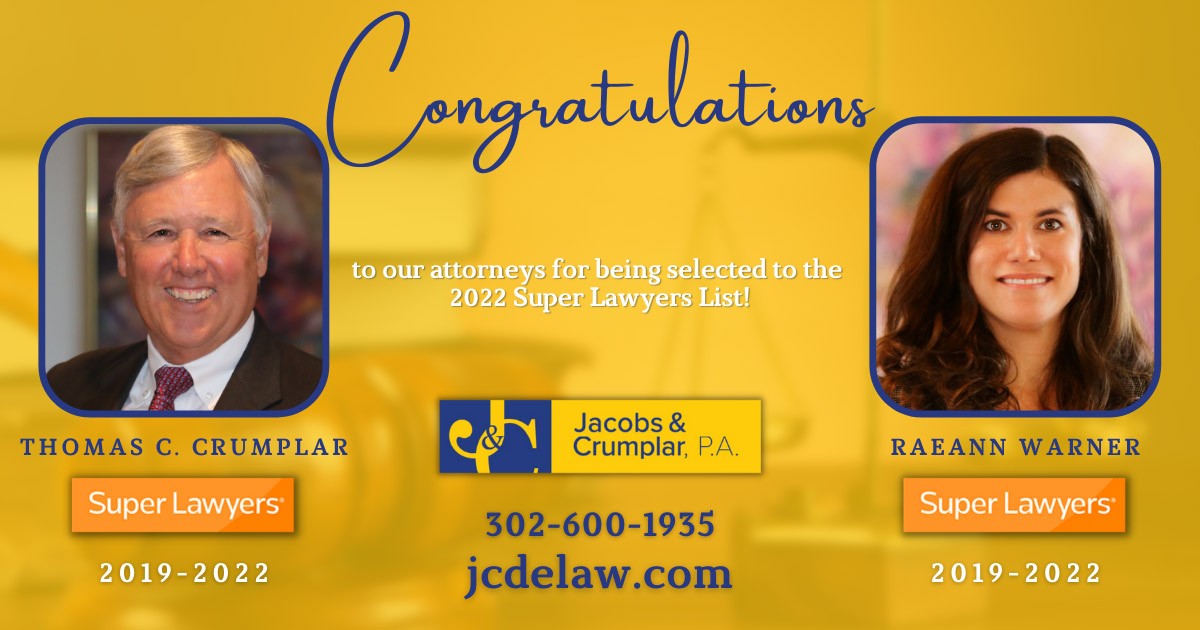 Jacobs & Crumplar, P.A. is pleased to announce that Thomas C. Crumplar and Raeann Warner have been named on the 2022 Delaware Super Lawyers list.

Thomas C. Crumplar, co-founder of the firm, is a seasoned attorney who advocates for plaintiffs in various personal injury matters. After briefly working for a corporate and defense law firm in Kentucky, he decided to focus his career on representing the “underdog.” In 1988, Tom obtained the second highest jury verdict in U.S. history in an asbestos case that reached $75 million. In 2010, he obtained the largest award in U.S. history in a sex abuse case, over $30 million, against an individual church. This is the fourth year in a row that Tom has been selected to the Super Lawyers list.

Tom earned his Juris Doctor from the University of Virginia, where he developed the university’s patent policy which related to projects completed by the scientists at the university. He authored numerous law review articles and was a speaker at national conferences as a law student before graduating in 1975. In 1981, he co-founded Jacobs & Crumplar, P.A. Tom is a member of Delaware and New Jersey bar associations, the American Association for Justice, and the National Crime Victim’s Bar Association. He is admitted to practice law in Delaware.

Raeann Warner, director of the firm, has represented plaintiffs in childhood sex abuse and employment cases for over 15 years. At the firm, she also handles complex personal injury and toxic tort cases. She was named on Delaware Today’s Top Attorneys list in 2017 and 2019 to 2021. She is admitted to practice law in New Jersey, Pennsylvania, and Delaware.

Super Lawyers uses a multi-phase selection process that involves a combination of peer recognition, professional achievements, and independent research. Starting with the nomination from a colleague, Super Lawyers highlights selected attorneys on a state-by-state basis in over 70 different practice areas. Evaluations include courtroom performance, pro bono work, and other professional honors and awards.

Jacobs & Crumplar, P.A. is a full-service law firm that is based in Wilmington and Millsboro, Delaware. For help with a legal matter, call 302-656-5445 or complete an online form to schedule a free consultation.